Art Revolution Coord (アートレボリューションコーデ, Art Revolution Coord) is a cute Best Friends Rare coord made by the brand Pure Palette and is Mio Minato's Pure Palette Unit Coord. It debuted in the Part 5 of the Data Carddass Aikatsu Friends! series, has made a cameo appearance in the new opening and ending sequence seen in Episode 26 and officially debuted in Episode 33 of the anime.

A white elbow-length padded blouse covered in pearls with gold lining and a trim of light blue tulle beneath the torso and sleeves. Each sleeve has a blue and white pearl chain around a ruffled sleeve cuff. Around the neck is a white ruffled collar with gold around the bottom and a piece of light blue tulle. Around the middle is a royal blue choker with a pink gem in the middle and a large crystal dangle beneath it. Pearl pink fabric with a thin white line pattern covers the chest area with gold lining and frills along the top. At the center is a royal blue section with hot pink on the top and bottom, and three sets of gold buttons with looped straps around them. Surrounding this is a glittering light turquoise band, with a gold music emblem on the left side. Wrapped over the right shoulder is metallic blue ribbon with a stripe of royal blue in the middle that has a gold curled pattern and silver border. This connects to a matching ribbon at the left lower corner of the torso, which is connected to a light turquoise bow with thin gold lines on it. At the center is a ruffled chiffon piece with a pink heart-shaped gem on it. A white and blue pearl chain connects the two sides of the ornament. Included are lace scalloped wrist pieces with a tiny, light turquoise bow sewn on top. The user gains pink nail polish and a large royal blue ribbon behind them shaped like butterfly wings attached to a pearl pink circular piece of tulle. On the ribbon is a white dot and diamond pattern in the middle and a border of white, light blue, and gold. There is also a thinner golden ribbon in the same shape, and a large heart made out of pink and white pearls.

A pale pink and royal blue striped skirt with gold lines separating each section. The blue has a gold diamond and curled line design, while the pink has a thin white line pattern. Between each stripe is a thinner, glittering light blue strip with a light turquoise and gold bow at the bottom. Each bow has a pink gem at the middle and a crystal dangle hanging from a gold pearl. Beneath this is an arched hot pink band with gold border, followed by a glittering chiffon band lined by gold frills and blue and white pearl chains. A semi-ruffled layer of white is beneath this with a thin gold ring circling the bottom and trim of pearl blue tulle. The waistband is royal blue with gold border and curled designs, adorned by a pink gem on the left corner that has a metallic blue ribbon hanging from it and circling the skirt, adorned by a single royal blue stripe in the middle with a silver border and a gold curled pattern.

Gold sandals with a wedge heel and a royal blue strap on the toe that has a pink gem in the middle surrounded by curled gold lines. Attached to the top are three pieces of scalloped fabric, including glittering light blue, pale pink with thin pearl pink stripes, and pearl blue. The foots heel has a royal blue and gold flap. From that are white and blue pearl chains wrapped around the ankle that connect to a ribbon matching the one from the shirt. On the left leg is gold and light turquoise ribbon wrapped mid-lower leg. The user gains light pink toe nails.

Two bows attached to each other worn to the left of the head, one is light turquoise with thin gold stripes, the other is metallic blue with a royal blue band in the center with gold designs and a silver border. At the middle is ruffled chiffon fabric held by a pink heart gem. A white pleat fabric hangs from the bottom with gold lining. Gold diamond stud earrings with a pearl chain are included with two gems per chain, one is a pink circle, the other is a crystal diamond. 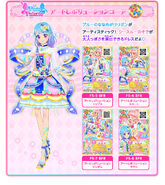 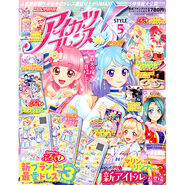 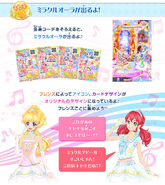