Blackberry Cocoa Coord (ブラックベリーココアコーデ, Blackberry Cocoa Coord) is a campaign rare coord made by the cool brand Material Color. It debuted in Part 2 of the Data Carddass Aikatsu Friends! series as a part of Aikatsu! Cafe Dress Campaign and made a cameo appearance in Episode 12 of the anime.

An indigo striped vest with a black lapel that has a gold star pin on the corner to match the single button beneath it. The entire vest is lined in gold, including the black pocket flaps, which are held by a tiny button. At the chest is white scalloped fabric with three tiny buttons beneath a sky blue bow. Included are black straps lined with ruffles beneath each shoulder, an indigo choker with a star hanging from it, and white gloves with black and gold cuff that has a gold bow on it and trim of indigo ruffles.

An indigo striped skirt with black around the bottom and gold lining. The waistband is black with a gold border and a bow at the middle surrounded by four stars. A white apron trim with black ruffles and lined in sky blue hangs from the front, accenting the line detail and dots on each side. The pocket has a line of black inches from the top, and sewn to each side of the apron is a sky blue ribbon.

Black pumps with a gold sole and three studs on the toe. White scalloped fabric wraps around the ankle with a layer of indigo beneath it, and a black band under it with a dangling star at the center. Mesh stockings are included with black cuff and a gold bow on the side. Above the left ankle are two pearl chains.

A black mini-hat with two gold stars on the corner. White scallops wrap around the middle, along with a sky blue bow. Gold pearl dangles are included with a star at the bottom, beneath an indigo bow. 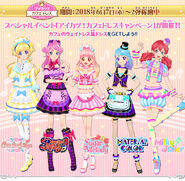