A dark blue sleeveless top lined in silver with three crystal diamond buttons sewn to the middle. On the left side of the torso are two white straps, and sewn over the chest is white fabric. A blue bolero is worn over this with dark blue sleeve cuffs accent by two fuchsia lines and accenting shoulder-pads. At the neck is a white fabric with lines of fuchsia, dark blue, and yellow on it. The user gains a single dark blue finger-less glove with a grey wrist.

A dark blue skirt with two fuchsia lines on the hem surrounding a skinny white line. The belt is white with silver buckle, lining, and studs, and hanging from it is a peplum shaped like a pair of blue tint tails that reside behind the skirt with silver enamel lining. On each hip is a white and silver pocket flap held by a single button, and randomly placed are gems and studs.

A pair of boots with a silver sole and a blue toe that has a row of silver studs on it. A diagonal line of silver enamel separates the two colors of each boot, one being dark blue and white, while the other is white and fuchsia themed, adorned by randomly placed gems and studs. The dark blue cuff has two rows of crystal studs on it. On the right thigh is a dark blue studded garter with a star in the middle and a crystal diamond gem hanging beneath it.

A blue stewardess hat with dark flap and lining of fuchsia and silver. Sewn to the front corner is a silver stylized star emblem. Silver dangles are included with a rectangular gem hanging from the bottom, one ear has a yellow gem, the other is sky blue. 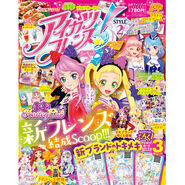