A pale cream sleeveless top with pink ribbon stitching on the sides. The top and bottom is lined with white ruffles, the top of which has a pearl chain, and going down the middle is a flap of gradient shimmery fabric of pale cream, blue, milk blue, pale peach, and light red. Over the fabric is a silver ornate design adorned by a few sky blue gems surrounding a spherical gem. Included is a silver choker with three dangles, two of which have a violet gem on the bottom surrounding the slightly larger azure gem. Along with a pair of opera gloves in a gradient of milk blue, pale cream, peach, and light red. Silver bracelets circle the wrist with a charm on top of the hand, and beneath the ruffled, pale cream cuff is a pearl chain and gem design. A band of silver circles the cuff.

Two shimmery, ruffled skirts of blue, white, pale cream, and red. Around the second skirt is a gem design, while the top has two sets of chains circling it, beneath a silver waistband covered in tiny gems surrounding a gold sphere. Beneath the two skirt layers is a longer ruffled milk blue layer with pale blue around the bottom separated by a thin silver line. On the inside of the third skirt layer are designs around the hem. Sky blue scalloped frills stick out from the second layer.

A silver pair of heels with a gem covered foot strap and ankle accents. A scalloped white piece circles the ankle with blue fabric beneath it. On the legs are various gem tattoo designs.

A silver headband or tiara with a gold, orange, and pink gradient gem in the center, surrounded by pearls, and a gem of crystal and rainbow coloring on each side. Included are pearl dangles attached to a gem matching the one at the middle of the head piece, and a crystal diamond beneath it. 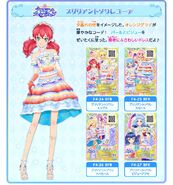