Enjoy Alphabet Coord (エンジョイアルファベットコーデ, Enjoy Alphabet Coord) is a rare coord made by the pop brand Colorful Shake. It debuted in Part 5 of the promotional collection of the Data Carddass Aikatsu Friends! series and did not appear in the anime. It shares its design with the Joyful Alphabet Coord.

A magenta checkered tube top with scattered white stars and indigo lining on both the top and bottom, bordered with gold studs. A gold vest is worn over this with a white ruffled strip around the bottom and above the chest, both adorned by a purple, blue, yellow, and raspberry diagonal stripe pattern. Multiple colorful pins adorn the vest, and the collar is magenta with studs on the side. Included is an orange bead necklace with gold dangles of C, S, and a tiny heart. Beneath the left shoulder is fuchsia fabric knotted on the side and covered in bubble letters, and alternate bracelets on each wrist, one has light pink, indigo, green, red, and light blue, the other has indigo, light blue, orange, red, and yellow.

A gold angle cut skirt covered in large, colorful bubble letters and circles with stars cut out, over a magenta semi-ruffle with studs on the corner. The waistband is indigo with gold stud borer and three stars at the middle coming in light blue, white, and pink. A ruffled, striped piece of fabric hangs beneath the waistband, and on the corner is an orange bead chain with an indigo star charm, and a fuchsia, white, yellow, and light blue swirling striped sphere.

Magenta pumps worn with a pair of socks matching the skirt, with an indigo bow sewn to the corner. On the right thigh are two connected orange gem chains with multiple gem charms hanging from it.

A baby blue circle with a purple star, attached to a fuchsia diagonal positioned bow covered in bubble letters. On the one corner is a piece of indigo scalloped fabric with a print of white, light blue, and fuchsia stars, while the opposite corner has gold pointed fabric. Magenta pearl dangles are included, adorned by an indigo star and a crystal gemstone. 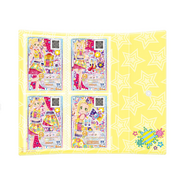