Fortissimo Red Coord (フォルティッシモレッドコーデ, Fortissimo Red Coord) is a rare coord made by the cute brand Sugar Melody. It debuted in Part 1 of the promotional collection of the Data Carddass Aikatsu Friends! series and made a cameo appearance in Episode 9 of the anime.

A white corset with a single ruffled strip going down the middle. The lower portion is red with dark blue lining and a trim of pearl pink ruffles. At the navel is a dark blue band lined by a section of white and adorned by four gold buttons. The collar has a single line of red tracing it, frilly lining, and a pale pink ribbon at the middle. A red bolero is worn over this with dark blue lining and white tulle. On each sleeve are two rings of white, one very skinny, with the cuff white and lined by dark blue tulle. On the side of the lapel is a tiny red, white, and dark blue bow on a gold chain. A gold button also resides on each side of the chest.

A skirt in three semi-ruffled layers. The first is red with a white tulle around the bottom and dark blue lining. Above this is a thin white line with a bow drawn in the middle. The waistband is lined in white with a tulle strip beneath it, and at the middle rests two gold buttons. The next layer is pale pink with a single white line inches from the bottom, followed by a diagonal stripe layer of white, dark blue, and red with gold frill lining. The user gains a white belt with a gold border and a patter of red and dark blue diamonds. Beneath the belt are multiple gold pearl chains, and on the side is a striped ribbon with a gold center.

White, knee-length boots with a golden sole and wedge heel. The toe is red, and on the side of the boot is a diamond tile pattern. On top is a red band, followed by a dark blue cuff with white tulle lining and a single, skinny line inches above it. A gold pearl chain hangs from the middle with a pale pink ribbon hanging from it.

A red top hat with a band of small white bows around the middle, followed by a band of blue and white striping. The rim is made from a pattern of red, white, and blue, with gold lining. On the side is a large gold G-clef. The user also wears red, white, and blue bow earrings with a gold music note hanging from it. 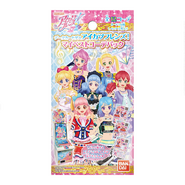 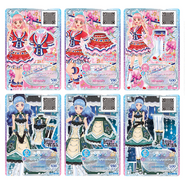 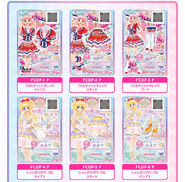