A pastel top with a trim of gingham fabric hanging from a thin gold band and white tulle. Pink gingham fabric resides at the middle of the torso, beneath a large magenta bow that has a gold music note pattern at the center. White fabric covers the collarbone, shoulder, and neck, with ruffled sleeves lined in pink. Around the neck are pale blue pearls surrounding a hot pink gem heart. Included are three bows for the right wrist, coming in chiffon, pink, and magenta.

A magenta skirt with a thin gold band around the middle lined with frills. Above the band is a gold scalloped line and a pattern of music notes, while beneath it is a gingham section with pale pink lining. This is followed by a pearl pink layer with a light pink dot and heart pattern. On the waistband is a similar pattern coming in white to math the tulle fabric sewn around the skirt beneath it. On each corner is a gingham ribbon with a single stripe of light blue in the middle lined with lace, along with a big pink gem. The right ribbon has folded white and pastel pink fabric hanging from it.

Pastel pink boots with magenta gingham covering the foot portion. The sole is brown with a wedge heel. At the middle of the boot are three, pink gem hearts. The cuff is made from white lace with a trim of pastel yellow ruffled material and a thick magenta ribbon tied around the middle. Blue pearl studs line the band, and at the middle is a gold pearl chain attached to alternating magenta music notes.

A magenta headband with a pattern of yellow hearts alternating with light blue dots. On each side of the headband is a chiffon ribbon. The user gains gold pearl dangles with a magenta music note hanging from the bottom, one being a G-clef. 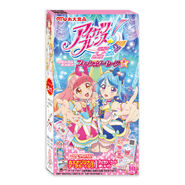