A dark brown corset with a band of lighter fabric at the center, bound by two white straps that have a gold buckle. The chest is white with frill lining, and inches beneath the top is a dark brown studded band, followed by two gold pearl buttons. A maroon short-jacket is worn over this with gold lining, fringed shoulder-pads, and two chains of gold studs on each side of the chest. A white band goes down each side with skinny strands over them, each attached to a pearl of peach, azure, or purple. A white band goes down the middle of the sleeve with black string over it, held by gold clips. The sleeve cuff is diagonally split between white and dark blue, with gold line detail and pearl button. The dark blue sailor-style lapel is adorned by a silver and gold badge on the right corner. Included is a gold choker lined by white ruffles and adorned by a crystal gem at the center. Beneath it is a short gold chain, with two chains wrapped around it. Short dark brown finger-less gloves with gold lining are worn on the hands, along with peach nail polish. The left wrist gains two gold pearl bracelets and a bangle, while the right has a decorative bracelet.

A peach and pale yellow striped miniskirt with a gold design around the hem. Over this is a bunched maroon layer with black string stitched off-center. On the right side are two dark brown and gold straps hanging down, along with a gold pearl chain with medallions and a decorative blue gem hanging from it. The waistband is a pale yellow flap with gold lining and border design, and beneath this is a thick white belt with gold medallion studs and buckle. Torn beige fabric wraps around the waist and hangs off the corner with a map pattern on it.

White boots with a gold toe and sole with wedge heel. Above the toe is a simple gold design, while decorating the leg portion are a different colored gems and pearls. Around the right boot are two dark brown straps with gold studs and buckles. The middle of the boot has a gold V-shaped cut to reveal pale yellow tulle beneath black strings, held by gold clips. The dark blue flap-style cuff is lined in gold with Baby Pirates written on the side and scattered gems and pearls. The cuff is held up by a red strap with a gold buckle at the middle. These are worn with fishnet stockings, and on the right thigh is a white garter.

A maroon hat with a blue band around the middle adorned by a light blue gem. Small red, green, and purple gems are attached to the corner of the rim, along with feathers of white, ice blue gradient, and a beige stripe. Blue diamond earrings are included, one with a gold medallion hanging from it, the other a feather tipped in pale yellow. The right earring has a gold chain attached to the upper-ear. 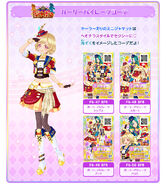