A white top with various blues and a pattern of gold snowflakes going down the middle, each with a light blue pearl at the center. Sticking out from the bottom is ice blue pointed fabric lined in gold, followed by a white textured layer. The user wears a white ruffled cravat with folded tail that has a blue four-petal ribbon on top of it with gold line detail and a pattern of diamonds and snowflakes at the middle of each piece. At the center is a big gold snowflake adorned by a light blue gem, and hanging from the snowflake is a silver and gold snowflake with a light blue gem. Over this is a glittery midnight blue gradient jacket with puffed shoulder and various white shine marks, dots, curled lines, and snowflakes The sleeve cuff is a light blue gradient with gold lining and strap, and the top is trim with white ruffled fabric. On the shoulder is a gold and white shoulder-pad, with fabric matching the top wrapping around the left shoulder and lined by gold fringe. At the middle is an azure band lined by diamonds with a snowflake at the bottom and gold lining, and beneath the chest is a pure gold strap lined by pale blue four-point diamonds and regular diamonds. The lapel is azure with gold lining and the designs from the jacket. The user gains white gloves with designs on top of the hand, and a single gold ring on the right index finger. When activated, the top becomes glittery ice blue to accent the lapel and band of the jacket, the various snowflakes turn gold or light blue, while the cravat, gloves, and fabric beneath the top turn blue and midnight blue. The gems gain a light green tint to accent the emerald gem shoulder piece.

A midnight blue gradient princess skirt with a stripe of light cyan at each corner, surrounded by a line of gold to accent the line around the bottom. Between each section is a snowflake surrounded by three curved lines pointing towards it. Above the line is a silver snowflake at the bottom of each corner, and at the center of each piece of the skirt is a large light blue gem on a gold and pearl stylized snowflake base. Surrounding it are white curled designs and two small snowflakes, and on top is a row of dots surrounding a crown. On top of each stripe is a blue four-petal bow with gold lining, diamond and snowflake pattern at the center of each piece, and a light blue gem. A pearl and diamond chain hangs from it connected to a stylized silver snowflake and two tassels. A similiar ornament hangs inches away from the ribbon but with a silver tassel, attached to two sets of gold chains that wrap around the skirt. The waistband has two gold buttoned straps, one on each side, and sticking out from the bottom are two ruffled layers of fabric, one is a mixture of white and various blues with a gold check design, the other is a textured white. When activated, the secondary layer appears to be made from emerald and the bottom layer becomes ice blue. The gems on the skirt begin to glow and gain a faint green tint, and the big snowflake turns white, while the smaller ones gain various gold and blue colors, and the secondary pair of tassels turn gold.

Dark emerald gradient boots with a white toe and metallic sole and thin wedge heel. On the sides of the foot is a white design, dots, and shine marks, and going down the middle is a band of light cyan with gold border and four silver chains held by four-point shapes. The glittery light blue gradient flap cuff is lined in gold and has a trim of white ruffles sticking out on top, and going around the bottom is a pattern of gold four-point shapes and diamonds. At the middle is the gem adorned snowflake resting over folded white cloth, with a dot and diamond stylized snowflake beneath it that has an azure gem at the center. Midnight blue tights are included with a gold snowflake pattern going down the side of the legs. When activated, the snowflakes on the legs, ruffled trim, and the toe and heel of the boot glow vibrant blue. The cloth beneath the boot cuff turns dark blue, and the snowflake ornaments colors are modified, along with the stripe going down the middle turning green.

A midnight blue gradient hat with a gold crown-like piece over it and a pattern of small light blue snowflakes. Around the base is a row of tiny pearls, and at the middle is the gold and gem snowflake ornament, which glows when the feature is activated. Gold pearl dangles are included with a matching snowflake at the center, followed by two pearls, one of which is white. 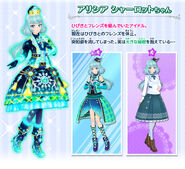 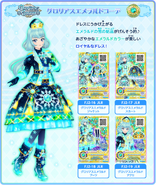 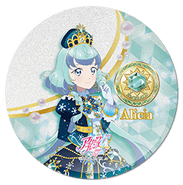 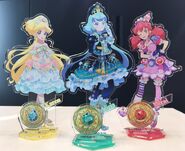 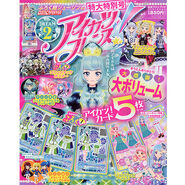 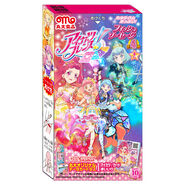