Midnight Ash Coord (ミッドナイトアッシュコーデ, Midnight Ash Coord) is a rare coord made by the cool brand Luna Witch. It debuted in Part 5 of the promotional collection of the Data Carddass Aikatsu Friends! series and did not appear in the anime. It shares its design with the Midnight Indigo Coord and Midnight Green Coord.

A white lace top with silver designs and lace trim around the bottom. Over it is a long grey vest with a band of black around the bottom separated by a skinny silver line. On each arm is a angular flap of fabric lined in silver and black, and trim with grey scalloped pleats lined with lace. A frilly collar is sewn between the shoulders, with a mauve bow-tie lined in gold and black, attached to the middle that has a long, single tail. On each side is a thin silver line surrounding a fleur-de-lis at the bottom. Two silver chains hang from the gem to the left shoulder, where a blue gem is sewn. The top is cut to expose part of the collarbone, and sewn on top of the chest are two scalloped pieces of fabric attached to a thin silver strand. One is black, the second is made from white lace. Beneath this is a strip of lace on each side of the torso. Included are grey elbow-length gloves with a black and mauve cuff that has gold pointed lining, each tip adorned by a small sphere. At the middle of the cuff is a silver design.

A grey princess skirt with a band of white going down the middle that has a line of silver on each side, surrounding three buttoned chains. The bottom of the skirt has dark blue frill strips cut in points held by a white string. A pattern design covers the skirt, composed of white and silver detail accent with a gold diamond. On each side, the front design has a mauve bow sewn to the center. The following layer is a dark blue semi-ruffle with a pattern of two white lines accent by detail, and around the hem is a gold ornate band. A black lace petticoat is sewn beneath this, and the waistband is dark grey.

Grey boots with a gold sole and white toe. On top of the foot is a silver strap to accent the designs going up the middle, adorned by a garnet gem at the middle. Around the top is a black and mauve design with silver detail, followed by a dark blue strap and trim of white pleats. Included are black tights with a silver straps on the side of the leg.

Three bows sewn together, including one of pale chiffon, black with silver line detail, and dark mauve with frilly lining. At the middle is a large garnet gem on a silver base. Included are tiny garnet diamond earrings with two gold chains hanging from it, connected to a silver horizontal crescent. The makeup item is ruby red lipstick in a dark blue tube. 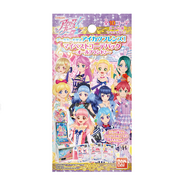 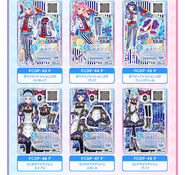 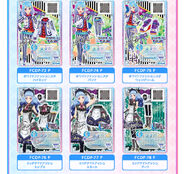