Mosaic Blue Coord (モザイクブルーコーデ, Mosaic Blue Coord) is a Rare coord made by the cool brand Material Color. It debuted in Part 1 of the Data Carddass Aikatsu Friends! series and made a cameo appearance in Episode 1 of the anime. It shares its design with the Mosaic Purple Coord.

A pale beige turtleneck with elbow-length sleeves and line pattern. Beneath the left shoulder are two gold chains, the bottom of which has three tiny garnet gems. A blue bustier is worn over this with a black enamel band around the bottom. The top has the same fabric in the form of a flap that connects to the sleeves, with gold border and two roses sewn to the left coming in red and pink, accent by a few leaf. Covering the sides of the bustier is pale blue fabric with blue, white, midnight blue, and yellow geometric shapes. Included is a gold necklace with three ruby gems, multiple gold bracelets, and a gold bangle on each wrist with unique detail. One has a blue pattern while the other has garnet gems around the middle.

A pale blue skirt covered in geometric print. The bottom has gold pearl lining, followed by a midnight blue band lined in gold and blue. The black enamel belt has a gold buckle and two gold pearl chains hanging on the right hip, with the bottom chain accent by gold dangles and gems. Sewn to the left hip are red and pink flowers with ruffled white fabric lined in gold beneath them.

Dark blue short boots with geometric print toe and gold sole. The tongue is blue with black shoelaces sewn to a skinny gold border accenting the lining around the top. Sewn to the side are pink and red flowers, along with a ruby gem on a gold base. Included are dull indigo vertical striped Tights with a gold pearl chain wrapped around it with occasional ruby gems on the right.

A pearl blue cloth headband with geometric print and a ruby gem attached to a gold square-shaped base. Gold pearl earrings are included with a large ruby gem on a gold base beneath it. The makeup item is perfume. 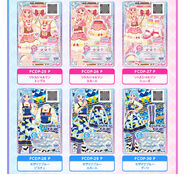