A white top with garnet border and a glittery pale violet, lavender, yellow, and light blue geometric pattern. Sticking out from top is a band of light blue lined by silver studs, while at the bottom is white and black striped fabric with black border. Covering the right is pearl blue fabric with line detail. The fabric connects to a midnight blue belted band above the navel, and covering the right arm is pearl blue fabric with a white and black striped ornate cuff. On the shoulder is a turquoise jaguar print fluffy band with a large garnet diamond and pieces of fabric hanging from it, including one of black with glitter, blue, and light blue. Wrapped around the left shoulder is a long piece of blue fabric lined in glittering black, while the opposite arm gains two matching sleeves sewn to a silver band. Beneath them are two straps coming in dark blue and light blue. The user also gains a blue choker with a silver and light blue gem ornament, silver and garnet bracelets, a single dark blue fingered glove, and a white finger-less glove with a cuff matching the left sleeve.

White boots, the left reaches the thigh while the right ends inches above the ankle. The sole is silver with an azure and silver ornate wedge heel, and blue coloring covers the toe with a trim of black and white striped scalloped fabric. The right boot has a geometric band on top with garnet boarder and pieces of scalloped light blue and glittery black fabric. The left boot has silver string lacing the middle and a geometric pattern tongue. Two bands hang mid-lower leg coming in blue and glittery black, while the opposite leg gains a black band with garnet diamond hanging from it, and a single blue stocking with lace stripes exposing the skin.

A white hat with blue rim and geometric print. A thin garnet ribbon wraps around the middle and connects to a small garnet and turquoise pom-pom with ruffled black fabric beneath it. Included are silver diamond earrings with a bead chain beneath it, surrounding a light blue diamond. The makeup item is a light blue compact with red blush. 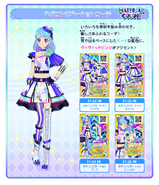 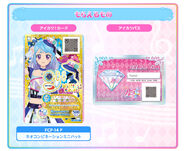 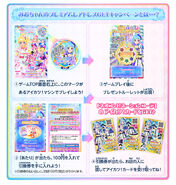 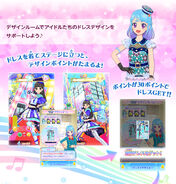 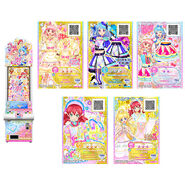 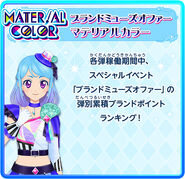