Pure Shining Sapphire Coord (ピュアシャイニングサファイアコーデ, Pure Shining Sapphire Coord) is a cool jeweling rare coord made by the brand Pure Palette and is Mio Minato’s Pure Palette Unit Coord. It debuted in Part 3 of the Data Carddass Aikatsu Friends! Brilliant Jewel series, made a cameo appearance in Episode 68 and officially debuted in Episode 75 of the anime.

A baby blue sleeveless top with ruffled, glittery blue bottom. Around the bottom is a ruffled piece of pastel rainbow fabric with a row of colorful gems sewn around the middle. Above the flap is a chain of pearls, connecting to a V-shape of pearls on the chest, each chain connected to a row of sun and pearl ornaments at the middle. At the middle of the chest is a four-piece azure silk ribbon with gold border, adorned by a large sapphire gem at the center. Ruffles of white surround this, and on the back of the torso is a light pink bow. An ornate pearl chain piece rests on each shoulder, and four chains connect from the chest to a pearl choker, which is trim with pastel rainbow fabric. Included are a pair of white elbow-length gloves that become sheer and glittery so far down to give them a transparent look, with various gold decorations and three gold pearl chains, two of which connect with a blue and pink gem piece. When activated the white ruffles look like gems, while the rainbow pieces glow and the torso section darkens in color and gains more glitter, with the middle turning dark blue. The bow and gems also glow.

A scalloped glittery blue miniskirt with a pattern of large gems around the bottom connected by gold chains. On each side is a larger gem, and sticking out beneath the skirt a layer of ruffled, pastel rainbow fabric. The white waistband has a gold pearl chain circling beneath it, decorated with a variety of small circular gems. Over the skirt is a large, split down the middle peplum that is white around the hip, followed by glittery pearl blue. The bottom has a thick gold ornate border and decorating the peplum are large diamond gems and gold detail. Sewn to each side of the peplum is a big bow from the chest but with a pink and blue gem ornament in the center lined by pearls, one adorned by a large sapphire gem, the other a pink diamond. They connect to the waistband and around the skirt by multiple ribbons. The inside of the peplum is a glittery pastel rainbow stripe, with various gems sewn in random places and diamonds hanging around the bottom. When activated the rainbow area become more vibrant and the gold details glow, along with the ribbons turning pure gold to match. The gems light up, while the white section of peplum and the waistband turn into gem material.

White boots with a gold sole to accent the ornate designs on the foot. At the middle of each design is a single, tiny gem, the right shoe has blue, the left has pink, with a pink diamond gem on top of it. Going up the middle is a diagonal stripe pattern of azure, white, and light pink, with the border made from pearls. Colorful ribbon of white, pale blue, fuchsia, yellow, and azure wrap around the leg, with the bow from the chest on top of the ribbon, but adorned by a pale blue and pink ornament on a gold pearl base. Beneath the bow is a pattern of sun ornaments and gems, each a different color. Ruffled, glittery blue fabric sticks out of the top. When activated, the ribbons, gems, and middle section glows.

A silver crown with a row of gradient, colorful pearls around the top of the white rim to accent the white pearls placed around the top. Around the middle of the crown is a gem coming in ruby, sapphire, emerald, garnet, topaz, and crystal. Tucked inside is gem-like fabric, and on the front corner is a pastel blue and pink ornament with a gold base and a sapphire gem, and two pieces of material. One is shimmery crystal, the other is a pastel rainbow stripe with gold ruffled lining. Included are a pair of pearl pink bow earrings with a circular piece resembling that on the crown, following a gold pearl chain with three pearls hanging from it. When activated, the base, fabrics, and gems glow. 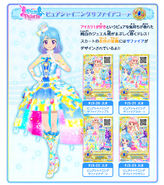 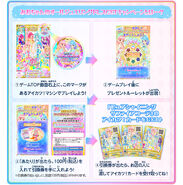